Our laboratory has diverse research interests that span microbial signaling, evolution, antimicrobial development, to the development of immunomodulatory therapeutics.

1. Elucidating the c-di-GMP signal transduction pathway in V. cholerae. A major focus of our laboratory is to use V. cholerae as a model system to discover fundamental principles about c-di-GMP signaling. To this end, we have shown that two transcription factors central in the regulation of biofilm formation and motility directly bind c-di-GMP. VpsR, the transcriptional activator of biofilm formation, is activated upon c-di-GMP binding while FlrA, the master regulator of motility, is inhibited. This results in an opposing regulatory pathway in which c-di-GMP acts as both a co- and anti-activator. Building on these studies we developed the first in vitro transcription system to show that c-di-GMP binding to VpsR drives it to induce open complex formation in RNA polymerase. A systematic analysis of c-di-GMP signaling in V. cholerae revealed high-specificity signaling indicating that c-di-GMP produced from different synthesis enzymes differentially impacts downstream phenotypes. We have also identified environmental factors that control c-di-GMP signaling and discovered that the intestinal cues bile and bicarbonate inversely control c-di-GMP levels, likely providing V. cholerae spatial cues within the human host. We have also demonstrated that the c-di-GMP-binding riboswitch Vc2 controls motility via inhibition of the downstream transcription factor TfoY. Finally, we have demonstrated a novel mechanism of gene regulation showing that Vc2 stabilizes a novel sRNA in cis by preventing its 3’ degradation. Below is a simplified model of the inverse regulation of biofilm formation and motility by c-di-GMP in V. cholerae.

2. Expanding our understanding of phenotypes regulated by c-di-GMP in V. cholerae. It has long been appreciated that c-di-GMP positively regulates biofilms and negatively impacts motility. However, it is known that the regulation of hundreds of genes changes when c-di-GMP levels are increased. We have recently discovered that c-di-GMP regulates numerous other phenotypes in V. cholerae including Type II Secretion, DNA repair, and stress responses to hydrogen peroxide. Furthermore, all of these traits are regulated as part of the VpsR/VpsT regulatory network, which also induces the genes necessary for biofilm formation, suggesting that these additional phenotypes lead to increased fitness of V. cholerae within a biofilm. Finally, we have shown that c-di-GMP also regulates cell curvature of V. cholerae. This cartoon shows a partial model of our understanding of c-di-GMP regulated phenotypes in V. cholerae. 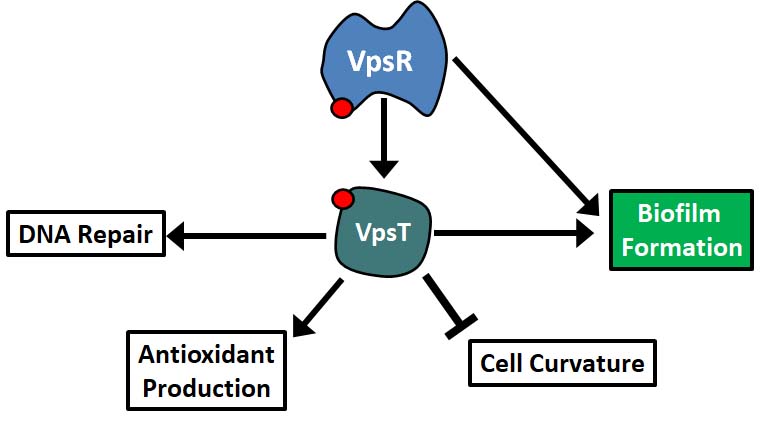 3. Discovery of the first cyclic GMP-AMP signaling pathway in bacteria. The newest cyclic di-nucleotide to be discovered in bacteria is the signaling molecule cyclic GMP-AMP in 2012. This signal was shown to be synthesized by the enzyme DncV encoded on a genomic island that is specific to the 7th, and current, pandemic of V. cholerae. We recently found that cGAMP synthesized by DncV activates a putative unknown phospholipase, which we named CapV, to remodel the membrane of V. cholerae. CapV is found immediately 5’ of DncV on this genomic island, suggesting these genes are a functional cassette that can move by horizontal gene transfer. This work has identified the first ever bacterial protein receptor of cGAMP and has significant implications on the evolution of V. cholerae pandemics. In the cartoon below, El Tor V. cholerae is represented by the hot dog, and its acquisition of two unique genomic islands, VSP-1 and VSP-2, by ketchup and mustard. dncV and capV are both encoded in VSP-1. 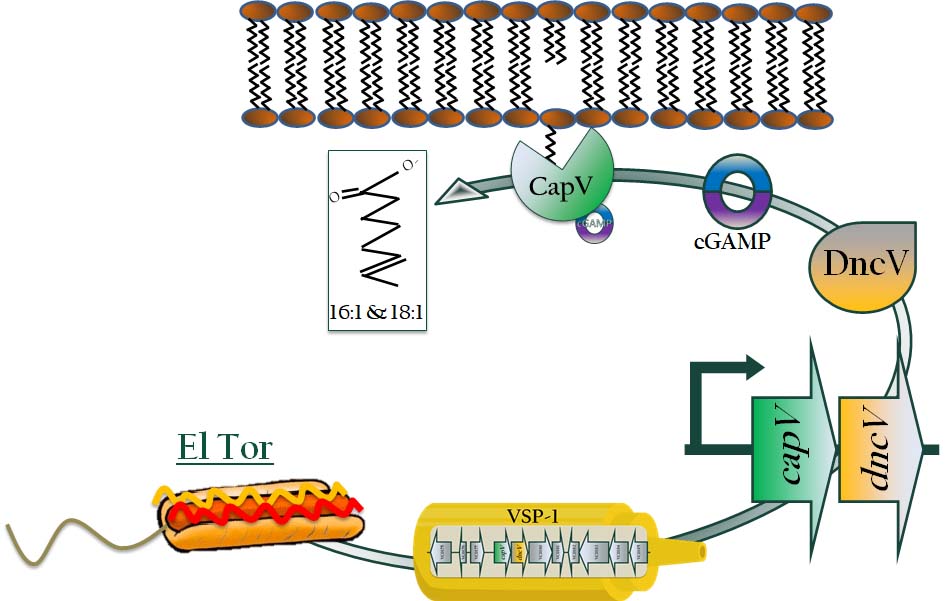 4. Developing novel technology that activates STING. In addition to our studies of cyclic di-nucleotides in bacteria, we have used the knowledge we have gained to develop cyclic di-nucleotide based viral vectors that can modulate the human immune system. Both bacterial and eukaryotic cyclic di-nucleotides are potent activators of the eukaryotic receptor STING to induce a Type I interferon response. Activation of STING has many potential applications including development of new vaccine adjuvants and treatment of cancer by activation of the immune system within the tumor microenvironment. With my collaborator Dr. Andrea Amalfitano, we have developed non-replicating Adenovirus vectors that express diguanylate cyclases from V. cholerae that synthesize c-di-GMP. We have shown these vectors are novel, potent vaccine adjuvants. Because STING activation can lead to tumor necrosis and enhancement of immune clearing of tumors, targeting STING is a leading effort in cancer therapy development. We have now performed a number of in vivo cancer animal models and demonstrated that our viral vectors can significantly delay growth, and in some cases completely resolve, tumors. Below is a cartoon of our modified adenovirus gene delivery vector that we are developing as a vaccine adjuvant and cancer immunotherapy.

5. Identifying and characterizing small molecules that inhibit biofilm formation. My laboratory seeks to apply what we have learned to develop new approaches to inhibit biofilm formation. To this end, we performed a high-throughput small molecule screen to isolate biofilm inhibitors. This led to the identification of a novel class of benzimidazole molecules that inhibit biofilms in a broad-spectrum manner, and the first ever described chemical inhibitors of diguanylate cyclase enzymes that synthesize c-di-GMP. In collaborative efforts, we were also involved in the publication of the second set of small molecules that inhibit diguanylate cyclases. Our more recent efforts have centered on identifying compounds that enhance antibiotic killing of bacterial biofilms. To this end, we have determined that compounds, such as the widely used triclosan and oxyclozanide, which can bind to protons and dissipate the proton motive force, named protonophores, synergize with tobramycin by disruption of the proton motive force to significantly enhance killing of Pseudomonas aeruginosa biofilms. The cartoon below depicts our model for how the protonophores, triclosan (TRI) and oxyclozanide (OXY) enhance tobramycin killing of biofilms by uncoupling the proton motive force to inhibit efflux pumps.