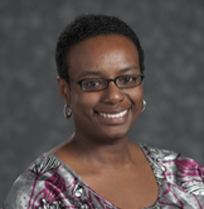 The Montgomery Lab pursues a common research theme of understanding how individuals perceive, respond to, and are impacted by the environments in which they exist. Primary research efforts of the group are focused on the responses of photosynthetic organisms to external light cues. Additionally, Montgomery pursues this theme in the context of effective mentoring in research environments.

Photosynthetic organisms possess the ability to finely tune their growth and developmental responses to changes in their ambient environment. The perception of light and the photomorphogenetic changes that occur in response to light signals are among the most important adaptive responses of any organism that uses light for carbon fixation. Our long-term research interest is to understand dynamic molecular processes utilized by photosynthetic organisms for adapting to changes in their photoenvironment. Biliproteins are light-absorbing pigments involved in both photosynthesis and the regulation of photomorphogenesis in cyanobacteria, algae, and plants. In higher plants, the biliprotein phytochromes control many aspects of growth and development, from seed germination through senescence. Functional phytochrome photoreceptors depend upon the convergence of two pathways: apoproteins are encoded by nuclear-localized genes, whereas the light-absorbing chromophore is synthesized in plastids (Figure 1). 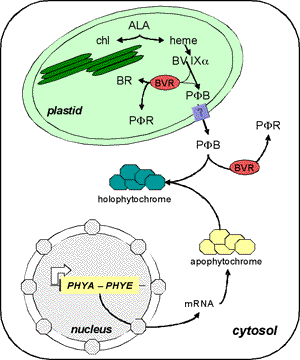 
Although a great deal has been discovered about the roles of individual phytochrome family members and the intracellular signaling mechanisms of phytochromes, our understanding of the distributions and mechanisms of spatially localized pools of phytochrome, which define the sites of phytochrome photoperception and regulate organ-specific light responses within plants, is limited. The Montgomery lab is conducting molecular studies to broaden our understanding of organ-specific phytochrome responses in plants. It has been demonstrated previously that constitutive expression of the gene encoding the mammalian enzyme biliverdin IX-alpha reductase (BVR) in transgenic Arabidopsis and tobacco plants alters light-dependent growth and development by metabolically inactivating the precursors of the phytochrome chromophore (Figure 1; Montgomery et al., 1999; 2001). We have adapted transgenic BVR expression as a molecular tool for probing localized phytochrome responses. Recent studies have demonstrated that localized BVR expression affects distinct aspects of light-mediated plant growth and development, including leaf-specific and hypocotyl/stem-specific responses (Warnasooriya and Montgomery, 2009; Oh et al., 2013). Additionally, we are investigating the role of mesophyll-specific phytochromes in coordinating anterograde signaling between the nucleus and chloroplasts, which is essential for establishing photosynthetically competent plastids (Oh and Montgomery, 2013, 2014).

Figure 2. Cells of the cyanobacterium Fremyella diplosiphon appear brick red in color under green light growth conditions (left) owing to the accumulation of GL-absorbing proteins. Under red light growth conditions (right), cells appear blue-green as a result of accumulation of pigments that maximally absorb RL. This response is controlled by a phytochrome-like biliprotein photoreceptor RcaE.


A second area of study focuses on complementary chromatic adaptation (CCA). Cells of the cyanobacterium Fremyella diplosiphon appear brick red in color when grown under green light (GL) due to the accumulation of GL-absorbing proteins (Figure 2, left panel). When grown under red light (RL), cells appear blue-green due to the accumulation of pigments that maximally absorb RL (Figure 2, right panel). CCA, a specific form of photomorphogenesis in some cyanobacteria, is controlled by a biliprotein photoreceptor with significant similarity to plant phytochromes. Biochemical characterization of the light-regulated signal transduction cascade controlling CCA is expanding our knowledge of the complex signaling cascades controlled by phytochrome-like proteins in prokaryotic systems, including recent insight into the regulation of morphology and stress responses (e.g., Singh and Montgomery, 2014, 2015; Busch and Montgomery, 2015) and photoregulation of second messengers during CCA (Agostoni et al., 2013, 2016). In summary, our current studies focus on the synthesis of photosensory biliproteins and their physiological roles during selected aspects of photomorphogenesis in the model plant Arabidopsis and in cyanobacteria.