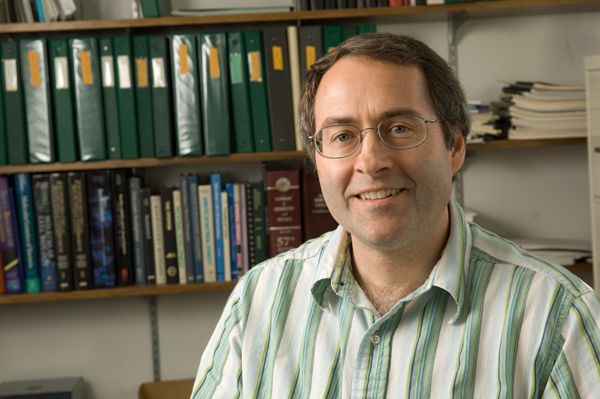 Certain bacteria undergo developmental processes that include cell-to-cell signaling and changes in gene expression that cause cells to differentiate.  We exploit the biochemical and genetic simplicity of bacteria to explore the molecular mechanisms of signaling and gene regulation during development.  The novel mechanisms we discover are likely to be used by many other microorganisms of medical, agricultural, and environmental importance.

Bacillus subtilis is a soil bacterium that undergoes development when starved.  The cell is partitioned into two compartments, the mother cell and the forespore, each of which expresses distinct sets of genes in an ordered temporal fashion, under the control of different sigma subunits of RNA polymerase. We are investigating how σƘ becomes active in the mother cell in response to a σG-generated signal from the forespore.  σƘ is first made as an inactive precursor (Pro-σƘ).  SpoIVFB is an intramembrane metalloprotease that cleaves Pro-σƘ in a reaction that depends on ATP.  Homologs of SpoIVFB are present in nearly all organisms studied and they regulate diverse signaling pathways important for human health.  We want to understand how SpoIVFB  1) recognizes Pro-σƘ, 2) is inhibited by the protein BofA, and 3) is regulated by ATP.  We are beginning to investigate other intramembrane metalloproteases.

Myxococcus xanthus is a soil bacterium that undergoes a multicellu­lar developmental process requiring several cell-cell signals. C-signaling regulates motility and differentiation of starved cells, resulting in aggregation followed by sporulation within a fruiting body. C-signaling also regulates the expression of nearly all genes induced after the early aggregation stage. We are investigating the signaling and gene regulatory network that governs M. xanthus development, with a focus on C-signal-dependent gene regulation. We discovered that two transcription factors, FruA and MrpC, cooperatively regulate C-signal-dependent genes. FruA mediates the response to C-signal by an unknown mechanism. This signal transduction pathway may inform cells whether they are close-packed in a fruiting body, since C-signaling requires close proximity between cells. MrpC is rapidly degraded upon nutrient addition to developing cells. This appears to tell cells whether they are still starving. In this way, only starving cells packed in a fruiting body would activate genes for sporulation. We are using a combination of molecular and mathematical modeling approaches to investigate the roles of MrpC, FruA, and their target genes in the network governing sporulation during M. xanthus development.