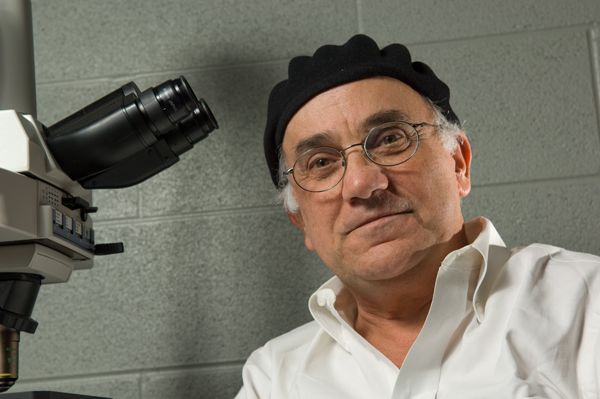 My laboratory has focused on the structure of microbial communities in a variety of habitats including soils and contaminated sediments, fish eggs, pig tonsils, human gut and vaginal tract, and anaerobic bioreactors. The evolving collection of culture independent techniques (Sanger sequencing, T-RFLP, Q-PCR, arrays and next generation sequencing) has pushed our understanding of the complex structure of these varied microbial communities. In addition to describing the phylogenetic composition of these communities, we are interested in how they change as a function of time and/or chemical perturbation and which populations are critical to the function and stability of the community. Currently my laboratory is focusing on the following projects.

Anaerobic reactors for remediation of farm waste. In collaboration with Dr. Wei Liao at MSU, we have interrogated the microbial communities of anaerobic bioreactors that differ in their feedstock (dairy manure versus dairy manure plus corn stover) and hydraulic retention time (HRT). Dr. Fan Yang (Ph.D., MSU-2013) was able to identify a unique community structure that correlated with optimum production of CH4. This community contained a population of Bacterioidetes that was absent in the other reactors. In addition, Dr. Yang and Ms. Rachel Rossi (BS, MSU-2012) showed that reactors with low HRTs were dominated by Methanosarcina, while higher retention times selected for Methanosaeta.

Contaminated sediments. We have worked for over a decade on metal contaminated sediments. From Oak Ridge National Labs we have examined uranium-contaminated sediments that are a component of the legacy wastes of National Laboratories. This work has been in collaboration with James Tiedje (MSU), Jizhong Zhou (OSU), and others. We have characterized the contaminated sediments using next-gen sequencing and found that these communities were dominated by Betaproteobacteria and Deltaproteobacteria including the known metal reducer Geobacter. Dr. Fan Yang demonstrated that these sediment communities shifted dramatically with different supplemented substrates and electron acceptors. In all cases uranium continued to be removed from solution, hence the uranium reducing and/or immobilizing function of the communities were maintained. Dr. Yang went on to isolate over fifty strains of bacteria that have been tentatively linked to uranium immobilization.

A second line of research in collaboration with Dr. David Long (MSU-Geological Sciences) has 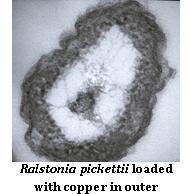 focused on copper accumulating strains of Ralstonia isolated from contaminated sediment of Torch Lake in the upper peninsular. Dr. Yang has shown that these strains can accumulate up to 5 x 107 molecules of Cu2+ per cell. The sequenced genome of two representative strains indicate large differences in genome structure and gene content even though the strains were isolated from the same cubic centimeter of sediment. Gene duplications, genomic rearrangements, bacteriophage and horizontal gene transfer have contributed to these apparently fluid genomes.

Microbial Interactions with Sturgeon eggs. Our collaboration with Dr. Kim Scribner (MSU-Fisheries & Wildlife) has focused on how to minimize egg mortality due to microbes. To begin this project we first determined the phylogenetic composition of the microbial community that was associated with the egg. Our investigations have included 16S rRNA gene clone libraries as well as next-gen sequencing and Q-PCR of the egg-associated communities. The null hypothesis for community assembly would be that the egg-associated community mirrors the aquatic community. 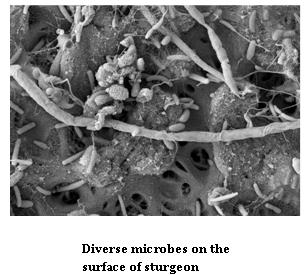 That is, whatever is in the water can bind to the egg. Our results clearly indicate that only a fraction of the aquatic bacterial populations can bind to the egg, which is essentially sterile when released into the stream by a spawning female. Moreover, the egg-associated community exhibits a successional pattern; the bacterial community changes over the developmental period of the egg and the structure of the egg-associated microbial community ultimately determines the mortality level seen for the incubating eggs (Dr. Masanori Fujimoto Ph.D. MSU-2013).

Pig tonsils. In collaboration with Dr. Martha Mulks (MSU-Microbiology & Molecular Genetics) we have examined the microbial community on the surface of pig tonsils. Porcine tonsils are a potential reservoir for pig and human pathogens. Hence understanding the dynamics of the tonsil community could aid in pathogen carriage abatement. Using 16S rRNA libraries we have found that the communities were dominated by species of Actinobacillus, Haemophilus, Pasteurella, Porphyromonas, Fusobacterium, Bacteroides, and Prevotella. The minor populations detected were herd-specific. With 454 sequencing we were able to define what we termed the “core microbiome” of the pig tonsil. This study also reported community composition that was herd-dependent.

Soil Communities. In a recent collaboration with Alexandra Kravchenko and Andrey Guber (MSU) we have correlated the structure of microbial communities with soil aggregate structure and pore size. To do this we have taken advantage of the Long Term Experimental Research facility at Kellogg 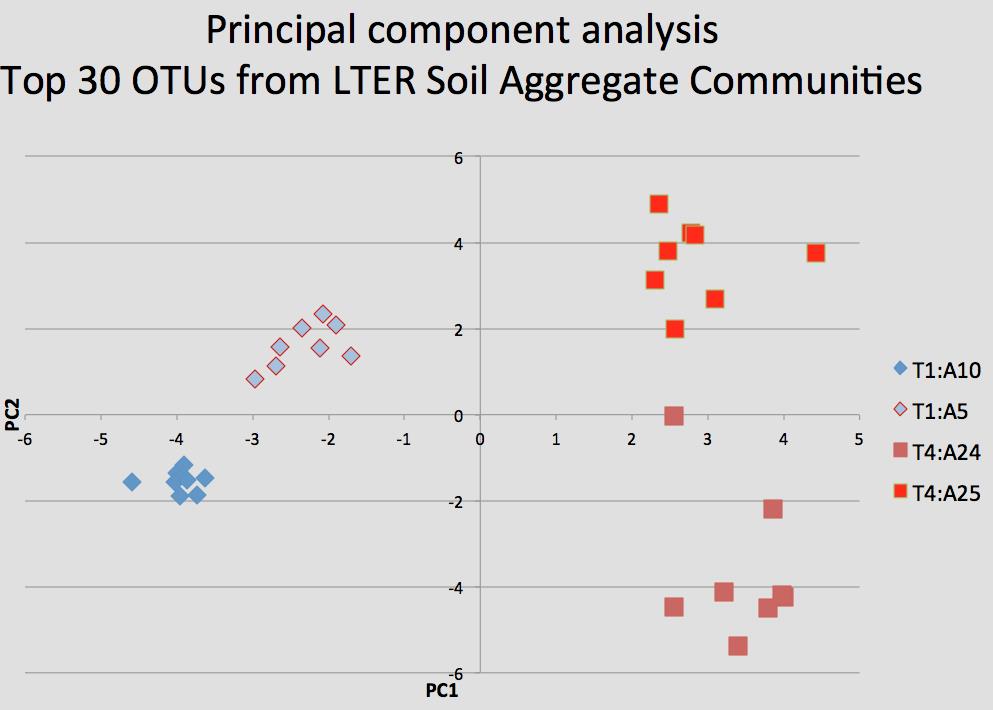 Biological Station. We concentrated on a comparison between conventional agricultural management (T1 plots) and biological control with a cover crop (T4 plots). Our analyses indicated that there were substantial differences in the structure of the bacterial community between aggregates from T1 and T4. Less of a difference was noted between the bulk soils from these two management practices.