In the Department of Microbiology and Molecular Genetics, we take pride in our unique and diverse community. Some of our members have traveled around the world to join us. Others are overcoming unusual syndromes and circumstances as they thrive in their research. Among these extraordinary individuals is Ph.D. candidate Osama Alian. While he is a graduate student and teaching assistant, Osama can also be found piloting planes, exploring the Lost City Hydrothermal Field, speaking on the TEDx stage, and most recently, working alongside NASA in the Human Exploration Research Analog project. Considering these experiences, Osama is an uncommon asset to the MMG community, serving as a role model for faculty, staff, and students alike.

Osama’s path to MMG started in a microbiology course in his undergraduate years “I can’t pinpoint exactly what drew my interest – but I was so amazed at how these seemingly insignificant cells can have such far-reaching effects on health and the environment”. As this amazement with microbes became an obsession, Osama shifted gears and started pursuing a degree in microbiology.  Yet, this plan was lacking something. Stemming from a long interest in outer space and the potential existence of life beyond Earth, he thought about retracing some steps and making a new turn toward a degree in astronomy. By a miraculous Google search with an auto-complete suggestion listing “astrobiology”, his whole world changed. While the public knowledge was limited, astrobiology careers have been around for decades, tying together disciplines such as chemistry, astronomy, microbiology, geology, among others. From that spontaneous search, he found contacts, learned more about the topic, and started pulling his interests together to pursue the unique goals he works toward today.

Due to Michigan State University’s extensive alumni network, which happened to include one of Osama’s mentors in post-undergrad, Osama’s search for graduate schools came with a focus on Michigan State University. This department has historic leadership in both microbiology and ecology, and it also offered his to-be mentor, Dr. Matt Schrenk, whose research interests aligned with Osama’s own. Continuing with the application and interview process, he was struck by MMG’s community and culture, and knew that he’d accept an offer if it were given. 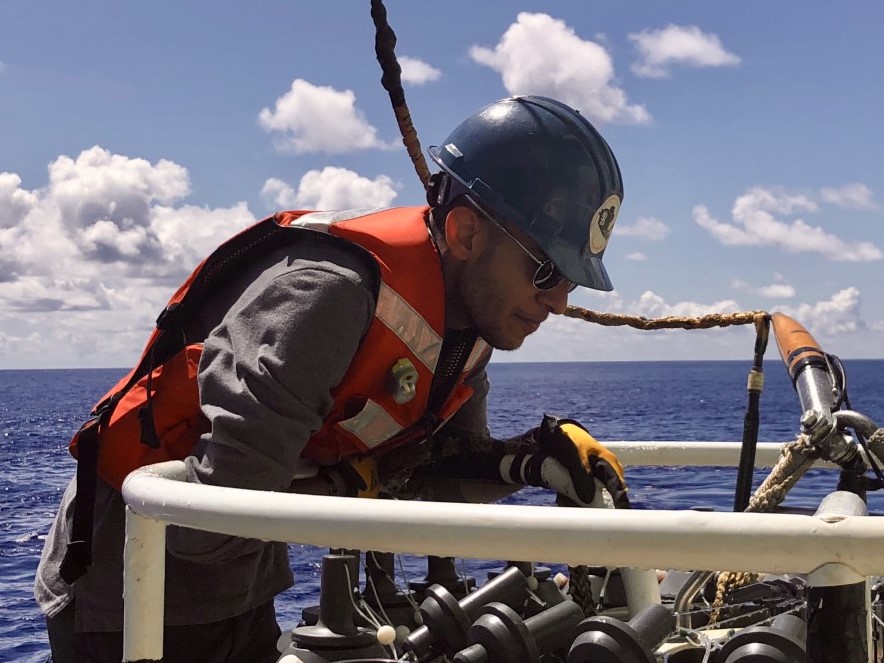 Osama's doctoral research focuses on the Lost City Hydrothermal Field, with data collections taking place along the Mid-Atlantic Ridge. Osama is pictured here on the R/V Atlantis for Expedition AT42-01.

Today, Osama is in the Schrenk lab making discoveries about his various interests. Primarily, he studies microbes that reside in the Lost City Hydrothermal Field, a deep ocean environment along high pH, hot environments at the ocean floor. This environment is analogous to those on distant planets and moons, so if there is life around these hydrothermal vents, then there could be life somewhere else in space. This project will also open a window into how life could have appeared and evolved on Earth.  With his continued interests in space sciences, Osama joined the crew of NASA’s Human Exploration Research Analog, Mission XXI. The HERA missions serve as research for NASA on the effects of isolation on deep-space missions, and this recent mission gave Osama a perspective of what astronauts might experience on a trip hundreds of millions of miles from home. While unexpected, it also gave him some shocking wisdom regarding isolation for long periods, as he exited the project in March of 2020, just as the novel coronavirus entered the United States.

With these aspirations and experiences, Osama has brought an extraordinary perspective for this department. As a strong teaching assistant, he’s bringing up the next generation of scientists, serving as students’ mentors when they need guidance in their careers or explanations in their coursework. Remembering his own undergraduate perspective, he teaches at his students’ levels, ensuring that all students feel valued and take pride in what they do know instead of dwelling on what they don’t. Reflecting on his career path, one can look at his key inspiration, pushing as far as humanly possible in hopes that someone can pick up where he leaves off. Just as Spartans will make uncommon impacts to life on Earth, Osama intends on making uncommon discoveries that determine our role in the universe.