I’d like to offer you a question: are viruses alive?

Most of us first learn this question in a basic biology course, and while many students leave the thought behind them after their classes end, this discussion became the catalyst propelling me toward a career in virology. Furthermore, the fact that these tiny viruses, whether they were alive or not, could thrive and use a host cell to replicate, spread, and cause a variety of different diseases including some cancers intrigued me and little did I know, this would be the basis of my research today.

After high school, I brought this question with me to Kyungpook National University in Daegu, South Korea, where I  completed my undergraduate coursework in microbiology. In 1992, I moved to the United States to enroll in the graduate program at the University of Wisconsin – Madison.  There, I earned my master’s and doctoral degrees studying bovine leukemia virus infection and its immunological consequences as a model for human T cell lymphotropic virus type 1 (HTLV-1) in 1999. After graduation, I moved to Boston to pursue postdoctoral research on HIV/AIDs pathogenesis at Harvard Medical School and develop novel screens for drugs to restore p53 function to cancer and to treat immune disorders at SK Biopharmaceuticals in the Chemical Genomics Division. In 2003, I returned to the home I felt in UW – Madison and in 2008 joined the tenure track at the University of Colorado Anschutz Medical Campus as an assistant and associate professor to start my own lab researching human papillomavirus (HPV) and cancer development, topics that remain the focus of my research to this day. .

In the last few years, through the MSU Global Impact Initiative, which is MSU’s mission to hire new faculty that can find solutions to worldwide problems, the College of Human Medicine’s Research Office and Dr. Vic DiRita offered a great opportunity and resource to expand my research scope, so one year ago, on June 1st of 2018, I started my work at Michigan State University as an Associate Professor, specializing in tumor virology, cancer immunology, and cancer genomics.

Focusing on my work at Michigan State University, my research boils down to a simple topic: viruses can cause cancer! While a heavy statement in terms of the information behind it, it’s simple to break down. Looking at the work of viruses, we see that they can cause cancer directly by inducing cell proliferation and transformation, or they can indirectly cause cancer by dysregulating the host immune responses. These immune responses, particularly anti-viral ones, need to be suppressed for a virus to survive for decades or frequently for a lifetime of the host. Because the anti-viral immune mechanisms largely overlap with the anti-tumor immune mechanisms, virus-induced immune evasion can facilitate cancer development by assisting cancer cells in their avoidance of immune recognition and elimination. In our lab, we study virus-induced immune suppression that contributes to cancer progression in order to develop novel immunotherapies for cancer patients, using our unique cell culture systems, in vivo animal models, and patient specimens and clinical data. 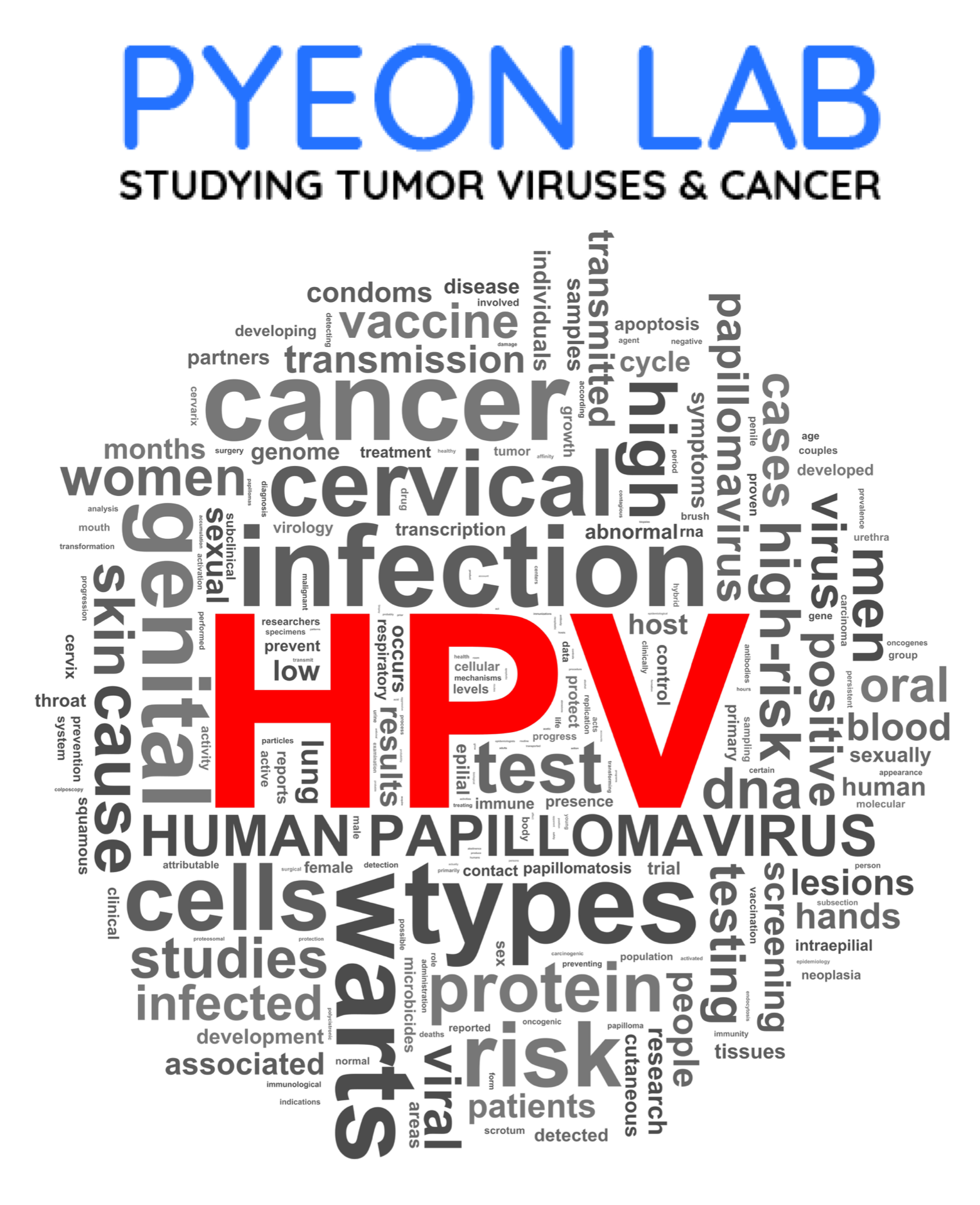 Because this topic is heavily loaded, all of our findings are considered important, but we’ve had one surprising finding that is of human interest, and that is related to the cytidine deaminase APOBEC3A. We first discovered that APOBEC3A inhibits HPV infection. Surprisingly, the HPV oncoprotein E7 significantly increases the APOBEC3A protein level in infected cells by inhibiting its degradation via ubiquitination. We thought it was strange that the virus increases its own restriction factor. We uncovered further interesting evidence showing that APOBEC3A has driven papillomavirus coevolution with their host species by selecting for variants that contain reduced APOBEC3A target sites in their genomes. Because APOBEC3A also induces cancer-causing mutations, our findings provide a new concept for the evolution of high-risk HPV genotypes and cancer mutagenesis by anti-viral host responses.

Aside from the research, coming to Michigan State University has given me the opportunity to return to the Midwest, which has been a second home for me since I left South Korea. In East Lansing, specifically, I’ve enjoyed the less stressful, small-town atmosphere and Spartans basketball games, and have been able to continue my hobbies: playing tennis, watching movies, and reading books.

As I’ve moved around the United States, I’ve also found that I’m a champion maker. While this is a premature assumption by correlation, I can’t go without saying that in each area I’ve moved to, the local sports teams win big. When I moved to Wisconsin, the Badgers won their first Rose Bowl and the Green Bay Packers later won their first Super Bowl in 29 years. When I moved to Boston, the New England Patriots won their first Super Bowl and the Red Sox won the World Series for the first time in 86 years. After moving to Denver, the Broncos won the Super Bowl for the first time in 17 years.

Considering my record of luck and the groundbreaking research that is coming out of our lab, I’m here to put the university’s favor for something great.