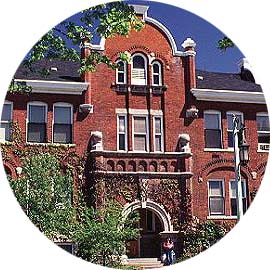 The department officially began as the Department of Bacteriology and Farm Hygiene during the 1900-1901 academic year. Charles Marshall was appointed Assistant Professor and department head (and only faculty member) that year. Marshall came to MSU in 1897 as bacteriologist and hygienist in the Michigan Agricultural Experiment Station. In its earliest years, the bacteriology lab was part of the Veterinary Laboratory building located just west of the present day Ag Hall.

In 1902, MSU built the first free-standing building devoted to teaching and research in bacteriology in the nation. Now named Marshall Hall, it housed the department (renamed the Dept. of Bacteriology and Hygiene in 1902) for the next 50 years. In its early years, the focus was on undergraduate teaching and research into farm-related bacteriology. As an example of the impact of the department, in 1916, over 60% of the students at then Michigan Agricultural College took at least one course in bacteriology. In 1914, it was said to have "probably the best equipped laboratory in the United States" due to profits from the sale of the hog cholera vaccine it produced. Marshall left MSU in 1912, with Ward Giltner appointed to head the department. Giltner also became Dean of the Veterinary School in 1923. On his retirement in 1947, he had been department head for 35 years, having also been Dean for the last 24 years of that time. The Department became heavily involved in teaching veterinary students with the beginning of this College shortly after 1910. It graduated its first M.S. in 1915 and first Ph.D. in 1925. In 1930, Alfred Hershey received his B.S. in bacteriology, followed by a Ph.D in 1934, working with I.F. Huddleson of this department. Hershey went on to receive the Nobel Prize in 1969 for his later work on bacterial viruses (bacteriophage). In 1926 Giltner began the first B.S. program in medical biology (later to become medical technology) in the U.S. In 1943, the department's name was changed to Bacteriology and Public Health, in part to reflect the heavy involvement of departmental faculty in public health-related diseases such as brucellosis and tuberculosis, along with its teaching commitment in medical biology. In 1954, the name was further changed to Microbiology and Public Health, indicative of the growing interest in parasitology and fungal diseases. In 1993, it dropped "and Public Health" from the name in recognition of the (much earlier) splitting off of the Medical Technology Program and its increased emphasis on basic research in all fields of microbiology.

In 1989, many departmental faculty were involved in the successful development of the Center for Microbial Ecology, one of the first 11 Science and Technology Centers awarded by the National Science Foundation (only two of which were biology-based). In 1990, the Department became home to Bergey's Manual and the Bergey's Manual Trust office. The department celebrated its Centennial in 2000, and is relocated in the new  Biomedical and Physical Sciences Building connected to the existing Chemistry and Biochemistry Buildings on south campus. The new facilities enhance the already high level of multi-disciplinary research being done in the department and its ability to recruit the best available faculty, students and postdoctoral staff.

These highlights are based on "The History of Bacteriology in Michigan," compiled by A. S. Schlingman for the 57th annual meeting of the Society of American Bacteriologists (Detroit, 1957), recollections of Frank Peabody, Harold Sadoff and other emeritus faculty, early reports to the State Board of Agriculture from Charles Marshall, and, most of all, the "Recollections of Early Microbiology at Michigan State University" of W. L. Mallmann (1974). 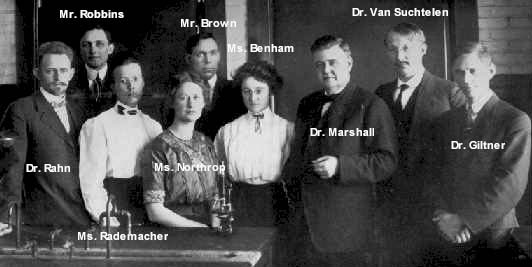